My name is Martin, I am male, 39 years old, 192 cm tall, weighed a lot in August/September 2010 after I stopped chain-smoking. I actually have no idea how much I weighed at that time. Let us assume it was around 200kg aka 440 lbs.

I will become an Ironman.

This is my journey.

When I started to gain excessive weight, I had a point where I stopped watching my own weight. This time was years ago. It was when a scale suitable for 330 lbs. did not show my weight anymore. From then on I lived blind to my weight, I was able to ignore it. The day I stopped chain-smoking I must have weighed at least 175 kg aka 386 lbs. (as much I can figure by now). Stopping chain-smoking increased my weight even more. My weight increased that even my oversized pants and shirts became too small. Coupled with a drastic change to the worse of my health I tried to continue with my “ignore” tactic.

It did not work.

It was at that time in September 2010, where a thought from time ago became stronger. Did I weigh 190 kg by then? By now I believe more. For the record I consider it save to assume that it was around 200 kg aka 440 lbs. My whole body felt full, 3 full warm meals a day and so much sweets. I call it the “cigarette exchange sweets”. I turned my food addiction into a sweets addiction and gained heavily due to it. So please do not be upset about my inability to tell my exact weight – I really do not know. Instead all I can do is to offer “an educated guess”.

Truth be told: It was so much that even I woke up.

The truth of being a fatsmoker

The truth is simple: gaining so much weight, smoking heavily and ignoring the consequences has a reason. It is about those problems, which life throws at us. But not just problems, instead it is those problems we either can not or do not want to solve. In my case I always could have solved it, but emotional pain stopped me from doing so – I actually did not finish solving those yet while writing this in September 2011. While accepting this simple truth my future was already obvious: getting to this point was a process and to improve life one has to turn around – a 180° turn. So loosing weight can not be drastic by eg. operation or surgery. Instead loosing weight is a process where I have to lose physical and emotional weight. Solve issues and drop the weight holding me back. It is about finding the strength needed to go on.

Accepting that simple truth was painful.

About life and death

For some time my way of living had something of… waiting to die – not caring at all. Simply since it needs a lot of ignorance to gain that much weight. Yet I had reached a point where it was not a mere thought but close to reality. For example open wounds, which did not heal anymore, a lot of water in my leg tissue in a way that I could not see my ankles anymore, unable to really sleep since my fat made it uneasy to lay comfortable and relax,…

Additionally my work forced me to see people.

So it was impossible to ignore myself anymore. Also – why stop smoking at all if all I do is ruin my health even more? I needed to do something to not feel the urge to smoke or at least forget it and so I went swimming more and more. I sold my car and used my bike only from then on. That is the time, where the thought to become a Triathlete was born. At first gentle, but the urge grew.

I realized I need help in swimming and so one came to the other. A former school friend started a small wager with me, a colleague another,… And suddenly I had 3+ wager running before I really had it decided. Actually accepting those wagers was a decision in itself: I will become an Ironman. Since I knew: If I do this, my weight is of no issue anymore. It is not possible to stay that fat if I do.

It was around October 2010, where it became serious and I looked for a Coach. November was around the time, where I had the feeling this might go on and I started this blog. So it all started in September 2010 and in November 2010 it had a name and a home. Thinking about the name it came naturally: fatsmoker2ironman.This blog was born.

This blog is my story, starting with post #1: This is where it starts.

There is always a reason. Purpose of this blog was to keep me focused. Offering me the ability to look back and see how it was. Enabling me to not forget where I come from. Offering me a chance to learn of past mistakes. Yet much more happened.

I met new friends online, I learned about more people and… I realized they care, while I cared too. Hey, it is online, maybe it was curiosity but in a weird way suddenly we communicated and were able to support each other. So this blog became a meeting place, a repository of information, which suddenly offered value to others too. But it did not stop. While I struggled with myself, thinking how close I was to really see the Lord if I had not changed, struggling to train and go on,… something unexpected happened. Suddenly people found motivation and inspiration. Something, which pushed me even more. Something, which still pushes me and which in return inspires me.

If you read this and found something for yourself… by then there is one thing I would like you to take with you. Something I learned on my journey already: “There are times, where you should not think, but instead just do – “Do it!” and make sure you never regret looking back.”

So I got over some of my issues in posting pictures. Well not really, since I don’t like pictures of me. Something which is most likely due to my past and the weight I had. Meaning: I need the feeling that I am far away (weight-wise) from the pictures I post before I do so. Despite my recent changes, I am still unsure on when I will post a current picture, but below two of me in “full weight”. Taken in Barcelona in the Goudi park (third picture I added much later for the contrast by now).

While at it: Please refrain from any jokes of switching my sport and training units to become a Sumo ringer – I know I would be a star by  now (probably, maybe,…). And yes I am seriously smiling while I wrote this :).

On these pictures I weighed app. 30-40 lbs less compared to October 2010. So to know how I started, you can try to imagine on how you add another 30 lbs to me on these pictures. Anyway – I don’t look like this anymore – not at all.

Yes – we will see when I post current pictures. 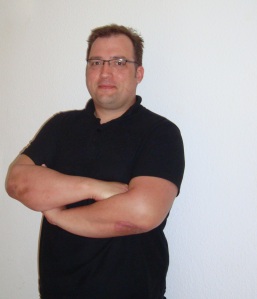 I honestly suck at making photos on my own of myself.

Despite loads of photos with better lightning and less reflection, I like this one most – don´t ask me why, it is right now 9 minutes old (the photo that is).

June is gone and now we are in July. Since I got a photo – why not post it? Here we go: fatsmoker2ironman in July. Yes, the upper one is me.

One photo of me during Challenge Roth 2011 on race day in swim exit zone.

Just a photo shoot for business, yet I enjoy this one too:

Front side header picture is a collage of pictures from Wikipedia commons. At the time I checked, usage of those pictures was free for non-commercial use.